The Centre’s architectural complex comprises three main structures—one Grade 1 and two Grade 2 Historic Buildings. Their history can be traced back to the construction of the first reservoir in Hong Kong—the Pok Fu Lam Reservoir. The Reservoir was constructed in 1863, the complex within which the Centre is located in, neighbors the Pokfulam Filter Beds (once renamed West Point Filter Beds), that was constructed later in 1890, serving as quarters for watchmen and workers. 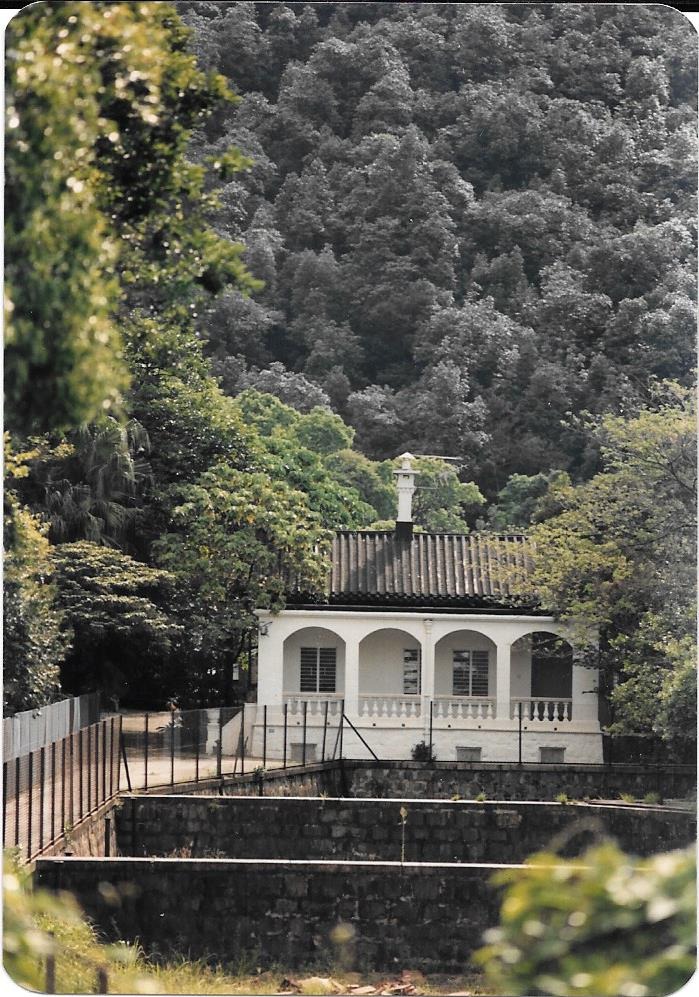 (left) The Pokfulam Filter Beds. The Exhibition Hall of our centre could be seen behind. An octagonal water valve of unknown age on the right, which the photo was estimated to be taken in the middle and late 20th century

Constructed in 1890, the Pokfulam Filter Beds is one of the oldest filter beds in Hong Kong, once used for filtering drinking water for the Pokfulam Reservoir. Stored in The National Archives in the United Kingdom, this 1891 map is a rare document showing the original four filter beds and the black rectangular bungalow next to it, where Lung Fu Shan Environmental Education Centre is now housed. According to records, the first watchman, Nund Singh, was posted in the bungalow in November 1890, at an annual salary of HK$240, protecting the filter beds and its water from damage, stealing and pollution. 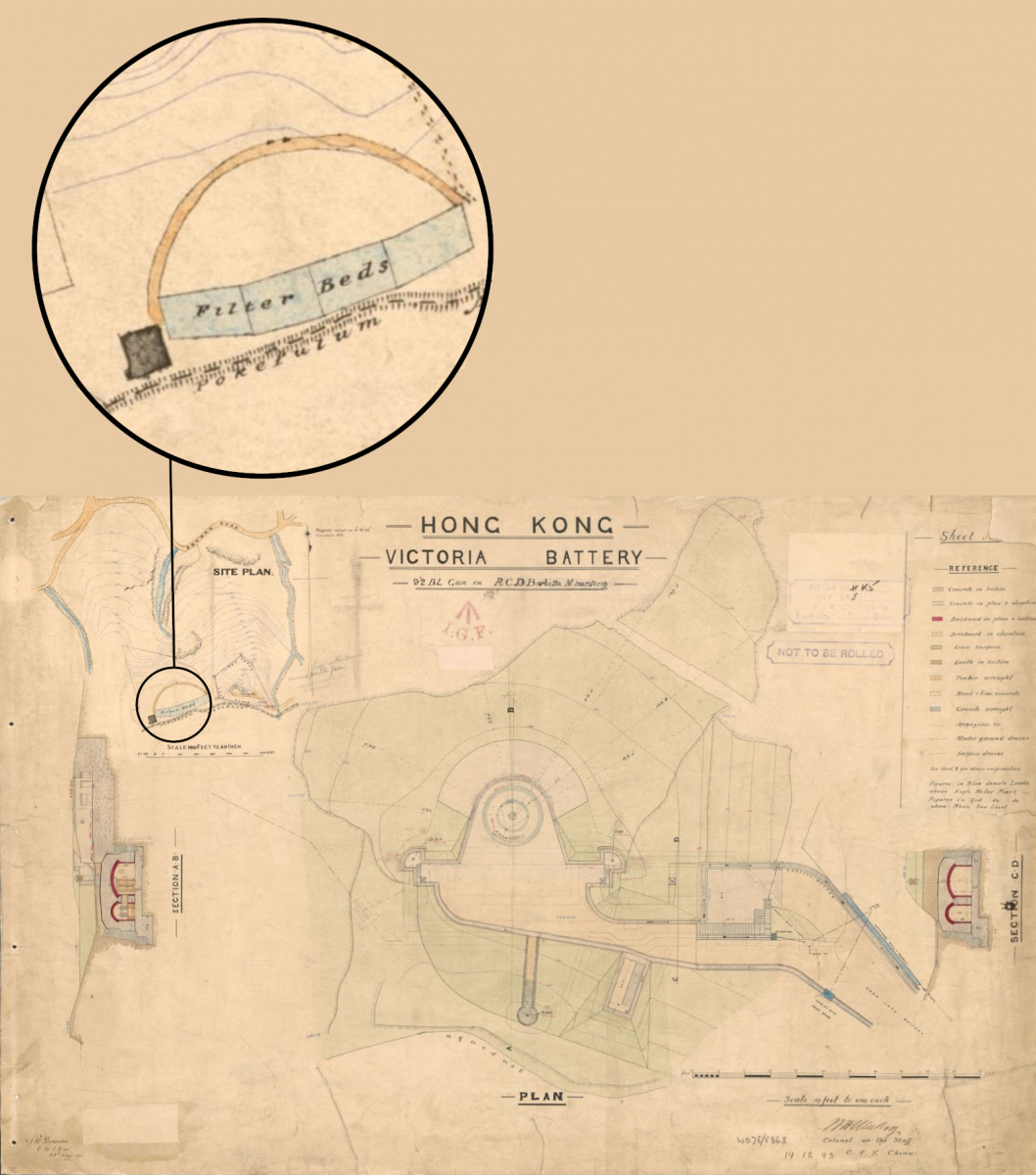 Bungalow refers to single-storey residential buildings built by the British. The architectural style originally developed in India; later introduced to South-East Asia to cope with the hot and humid climate. Similar bungalows can still be commonly found in other past British colonies, yet there are very few that remain in Hong Kong. Features of bungalows include elevating the whole building with masonry plinth (see green markings), as well as building a verandah outside the house (see yellow markings); these function as cover, lower the temperature and cut off the humidity near the ground. A fireplace and chimney (see arrows) for warmth can be found inside.

The bungalow is more architecturally sophisticated, housing watchmen and overseers; the simpler, smaller building adjoining likely served as “Coolie Quarters” originally; the workers’ quarters furthest from the bungalow is also simple in structure, likely built at a later date. From at least the 40s, the middle bungalow was divided into two, with a wall extending to the end of the garden and separating the residents.

The bungalow became government quarters in the 1980s. Third from the right, her back to the camera but with a bright smile is Stephanie Crockett, a landscape architect and bungalow resident (1988-1996). Stephanie decorated her home in an Oriental style, and it was once featured in a magazine. Stephanie has hosted many weekend garden parties for her friends. 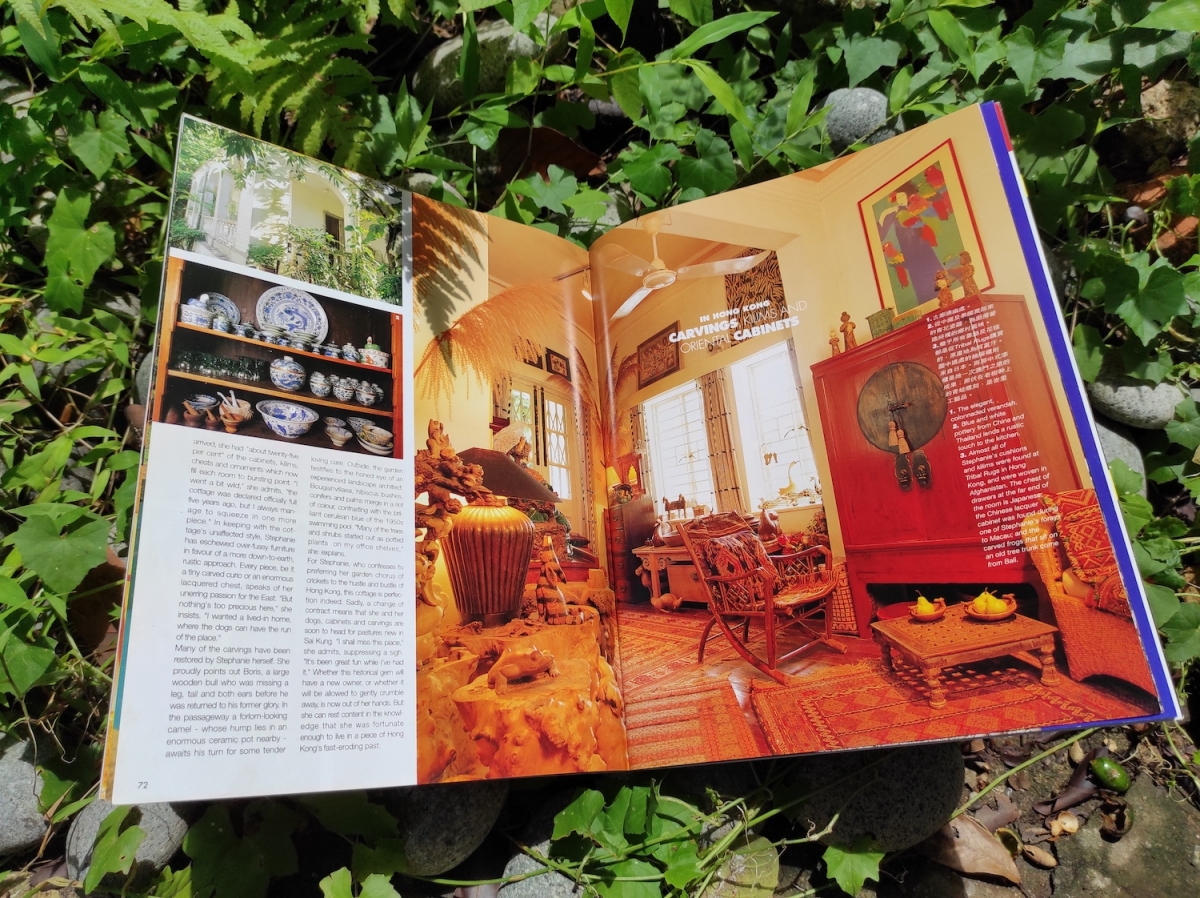 Swipe to compare the view then and now

On the other side of the wall, the red-brick building was divided into two rooms, housing different workers and their families, including Mr. Lee, a Water Supplies Department employee, who moved into the house in 1987 with his wife and two children. The Lee siblings spent their childhood with mountains and trees alongside snakes and geckos. Separated by a wall and no common language, the Lee family and Stephanie could not be said to be close. Yet, the photos show the Lee family had visited the neighbouring garden to play.

Swipe to compare the view then and now

In 2006, the last resident of the bungalow moved out. The separating wall was taken down in 2008, finally reuniting the three buildings, becoming the Lung Fu Shan Environmental Education Centre.

In 2009, the two smaller buildings: the white construction once the kitchen and workers’ quarters, now the activity room; as well as the red brick house, once the workers’ quarters and now staff office, was rated Grade 2 Historic Buildings. The bungalow where the exhibition hall is now located was rated a Grade 1 Historic Building the following year.