Hong Kong’s scientific authority on amphibians and reptiles is Father Anthony Bogadek, who has lived in the city for half his life.

Father Bogadek was born in war-torn Croatia. He was mostly self-taught at an early age, eventually becoming a Salesian priest. In 1949, he was assigned a teaching position at St. Louis School, moving to Hong Kong at the tender age of 19. In the 60s, St. Louis began to offer biology as a subject. In order to teach evolution from a catholic perspective, the school sent him to the University of Dublin to study biology, before returning back to teach in Hong Kong. 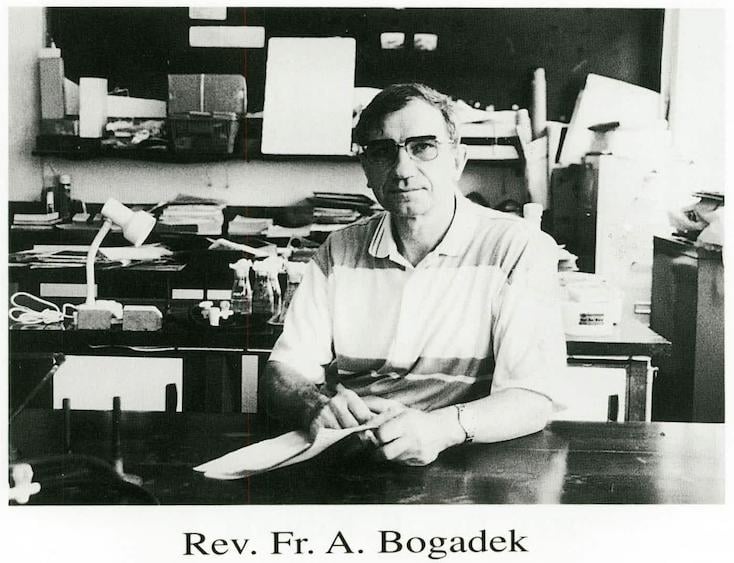 In 1975, when Father Bogadek was listening to a lecture at the University of Hong Kong (HKU), he met amphibian and reptile expert, John Romer. Under Romer’s encouragement, Father Bogadek surveyed the hill behind the university, today’s Lung Fu Shan, in order to find amphibian and reptilian animals. Not long after he began, he found different varieties of snakes. Later, various lizards and frogs came to his attention. Gradually, his students began to follow him on these surveys, trekking through the Hong Kong countryside day and night to collect specimens for further study and observation back in school. 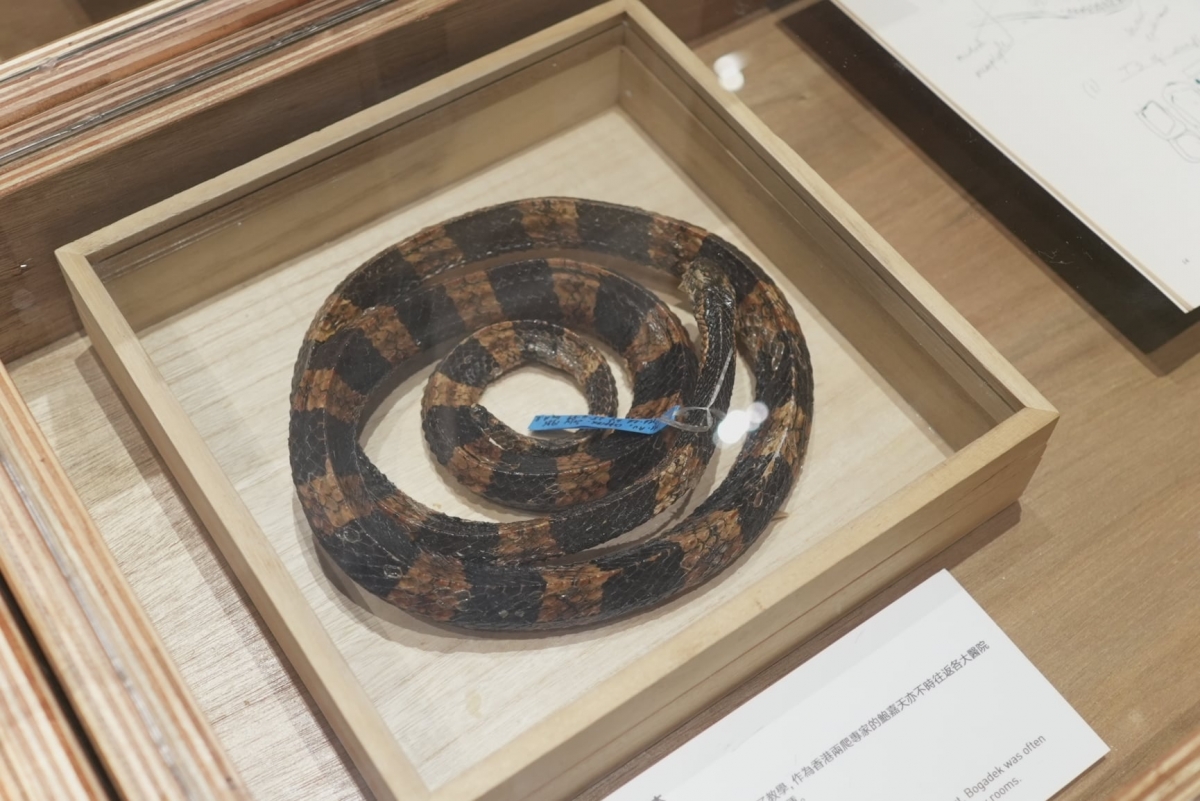 Banded Krait specimen collected and made by Father Bogadek

The Romer’s Tree Frog is an endangered species endemic to Hong Kong. It is also Hong Kong’s smallest frog, approximately the size of a fingertip. Well-camouflaged, the frog is not easily noticeable in the wild. Romer discovered and named the frog on Lamma Island in 1952. The following year, a cave containing the species was found to have collapsed, leading scientists to conclude that the Romer’s Tree Frog became extinct.

In 1982, Romer passed away from illness in England. Two years later, Father Bogadek and his student, Stephen J. Karsen, found the elusive Romer’s Tree Frog on Lamma Island again. Following in Romer’s footsteps, Father Bogadek wrote Hong Kong’s first herpetological guide, published in 1986 as “Hong Kong Amphibians and Reptiles”. Even though he invested a lot of time into the book, he insisted that his students were credited as lead authors, placing his name at the back. 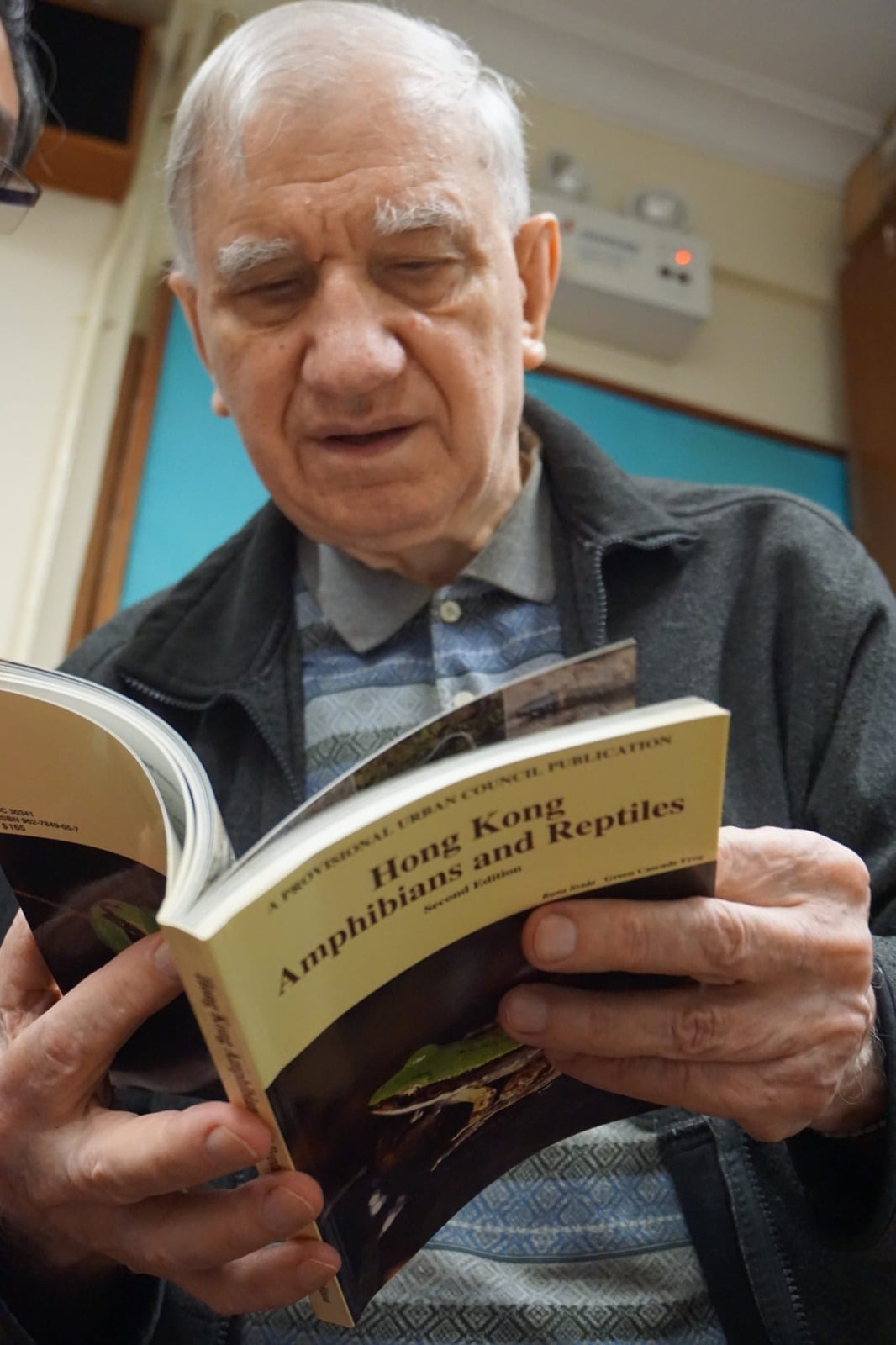 Father reading the book Hong Kong Amphibians and Reptiles, published by him and his students (©️ St. Louis School)

During the construction of the Chek Lap Kok Airport in the 1990s, the Romer’s Tree Frog faced the threat of habitat loss once again. Encountering many trials and tribulations, one of Father Bogadek’s students, Michael Lau, who researched the species in HKU, relocated hundreds of Romer’s Tree Frogs and gazetted various sites for ecological conservation.

In an interview, Father Bogadek once mentioned, “They [amphibians and reptiles] spend most of their lives outside of our sight, we lack knowledge in them. The more one researches, the more one realises that what is recorded in books is different from what one actually observes, and that widely-accepted knowledge might not be entirely correct.”

Father Bogadek is ninety years of age this year, with a string of students in his legacy. Currently retired, he still reminisces about his days teaching biology from time to time.